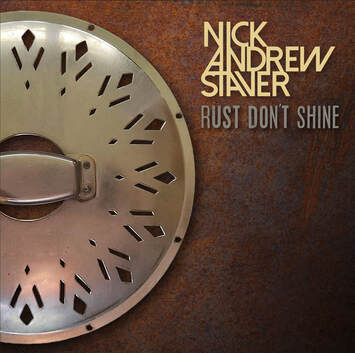 As promised, here is a rough demo of a song I've referenced before called "Appalachian Moon" (scroll down to post #4 for some behind the song info). But this time, today's post features my dear friend, Virginia Masland on mandolin!
Also featured on this track is Adam Grabowski (drums) and Jesse Landis (upright bass).
​Enjoy!

A few weeks ago I had an "appreciation" post for my friends, Cody Wilt and Virginia Masland.
But I didn't get to share any of the music from them.... that changes now!

Today I have a rough demo of a song called "If I Had To Guess" which I invited Cody to play on. Within a day, he called me, excitedly talking about his ideas for the song. We chatted about the song but ultimately I said "come in, be you" and he did. Cody is very well in the conversation when it comes to insanely talented guitar players. The kind of player that makes other guitars players, like me, wonder if you should stay at his show or go home and practice. Cody has a great soul and it is reflected in his generosity, personality and musicality. Enjoy this rough demo, I have another post of Virginia's song coming later in the week.

One of my favorite things about making an album like this one is bringing in my supremely talented friends to lend their musical flavors to my songs. Each special guest on this record was filled in about their song/songs, I answered questions if they had any, but they were left on their own as to what to play.

And that is when special moments happen.

A few months ago I had the pleasure of recording my friends Cody Wilt, guitarist from Cold Spring Union and a couple weeks later, Virginia Masland, instrumentalist and singer from Cumberland Honey.

Both Cody and Virginia are powerhouse musicians and it'll show on the songs when you hear them. I'll share some snippets of their performances after I return from New York this weekend.

Until then, this post is to promote them. Below are links to their respective bands. Give them a "like" or a "follow" and check out the fantastic music they make with their bands!

Ladies and Gents - I present you studio master extraordinaire, the rhythm keeper of my heart, my dear friend, Mr Adam Grabowski
Adam and I have been playing live together for about a handful of years now. But my first professional work with Adam came when he took over mixing and mastering responsibilities of my 2017 album, YOPE.
Now here in 2022, I am greatly pleased to team up with him on this new album and bring you nothing short of our very best!
Nick

FUN FACT: That one of my wife's painting over my shoulder!

SIDE NOTE: A question was asked a few weeks ago that I wanted to address with everyone incase you aren't aware. At this moment, I'm only sharing "demo" recordings of the songs. These are not the versions that will end up on the final cut of the album. These are simple, quickly recorded sketches of the songs. Demos help me as a songwriter. It allows me to hear the song how you, the listener, would hear the song, then I can make changes to lyrics, arrangements, etc... It also allows me to send versions of the songs to Adam, so he can make decisions on how to approach the recording process when making the album versions.

"I Got You" has been around for a few years now, you might have even heard me play it live at a couple shows. I never got around to recording it because I didn't want to force it on an album. I really wanted this song to mature and with Adam's suggestions of slowing the tempo and adding a piano track of some kind, just might do that.

I've always told the story of this song to be about helping out a friend in need because they were there for me.
One, there is some truth to that. Two, more times that not, that friend is also myself.
This song is a look in the mirror every time I sing it.
We don't always have to fight our battles alone but sometimes, every so often our best ally is ourselves.

VIDEO
This is only a small start. Lots more content is on the way. Recordings. Videos. An insight to my lyric editing process. And much more!
Enjoy this video and I'll let you know when more is posted. Cheers!